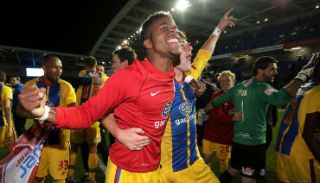 The two sides were level 0-0 after Friday's first leg and it took until the 69th minute of the second leg for the visitors to break the deadlock.

Zaha, who is joining Premier League champions United in July, sent Palace a step closer to joining him in the top flight with a header from close range after a superb cross from substitute Yannick Bolasie.

The Ivory Coast-born forward made sure of the win with a fine left-footed strike into the roof of the net two minutes from time.

"I've got no words to express how I feel right now. It means the world to me, I've played for Palace for 10 years so doing this for Palace is just perfect for when I leave," Zaha told Sky Sports.

Brighton's best chances had come a few minutes before Zaha's opener with substitute Ashley Barnes having one effort saved on to the bar and another cleared off the line.

Palace, who finished fifth this season behind fourth-placed Brighton, are seeking a return to the Premier League for the first time since they were relegated in 2005, while manager Ian Holloway last managed in the top flight with Blackpool in 2011.

It is the second successive year Holloway will be heading to the Championship final after Blackpool were beaten 2-1 by West Ham United last term.

While Holloway was delighted with all his players, he was in no doubt about how vital 20-year-old Zaha's role had been in getting them to Wembley.

"I wish he was still with us next year," he said.

Watford booked their place in the May 27 final at Wembley on Sunday when they beat Leicester City 3-1 on the day for a 3-2 aggregate victory.