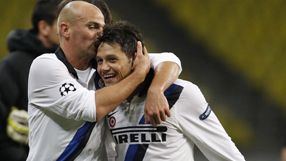 Inter, stunned by Turkey's Trabzonspor 1-0 at home in their Group B opener two weeks ago, triumphed thanks to Mauro Zarate's winner as Ranieri recorded his second victory in two games since replacing the sacked Gian Piero Gasperini.

"We played well, passed the ball well and also controlled the tempo," added the former AS Roma, Juventus and Chelsea manager.

"But the most important thing that led us to our victory was our team spirit."

Inter sold top striker Samuel Eto'o to Russian club Anzhi Makhachkala and signed Diego Forlan from Atletico Madrid in the close season but the Uruguayan is ineligible for the Champions League after playing for the Spanish side in the Europe League qualifiers.

The Italians, who were also missing several leading players through injury, including playmaker Wesley Sneijder and midfielders Dejan Stankovic and Thiago Motta, went ahead in the sixth minute.

Brazil defender Lucio's side-footed effort was deflected in following a corner after he was left unmarked at the far post and CSKA keeper Vladimir Gabulov misjudged a high ball.

Giampaolo Pazzini then added a second from close-range in the 23rd minute following a low cross by Yuto Nagatomo with CSKA's defence in disarray.

Alan Dzagoyev pulled one back for the home side, however, blasting in a 20-metre free-kick on the stroke of half-time.

The hosts, urged on by a passionate crowd at the Luzhniki Stadium, piled on the pressure after the interval and Brazilian striker Vagner Love levelled in the 77th minute.

But their joy was short-lived as substitute Zarate fired the visitors ahead again just two minutes later with his first Inter goal, giving the 2010 European champions their fifth win over CSKA in five Champions League matches, including all three meetings in Moscow.

CSKA, who had their own injury problems with a number of key players including first-choice goalkeeper Igor Akinfeyev on the sidelines, were unlucky not to have scored more.

They had a strong penalty appeal waved away by Scottish referee Craig Thomson in the 17th minute when Seydou Doumbia appeared to be taken down by Lucio inside the box.

Ivory Coast striker Doumbia, who scored both of CSKA's goals in a 2-2 draw at Lille in their opener, also headed against the post midway through the fast-paced first half.

Both teams missed plenty of chances after the interval.

Zarate had a shot blocked by Gabulov while at the other end Dzagoyev fired straight at Julio Cesar.

The Russians though, who scored two late goals to snatch a point in Lille, could not produce the same escape.

"I think we were a better team but luck was just against us," an emotional Dzagoyev told Russian television NTV Plus.

"I feel we deserved at least a point ton