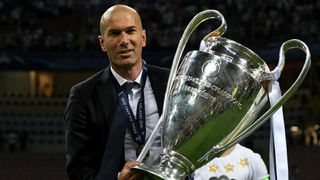 Zinedine Zidane is a different person now that he has become coach of Real Madrid, according to Bixente Lizarazu.

Zidane spent five years at the Santiago Bernabeu as a player, during which time he won one La Liga title in 2003 as well as the Champions League in 2002 - scoring a stunning, memorable volley in the final at Hampden Park.

The former midfielder was in charge of Madrid's reserve side for 18 months before being promoted to the top job in January following the departure of Rafael Benitez.

Under Zidane, Madrid embarked on a stunning run in the league that saw them almost pip Barcelona to the title, before a penalty shootout success over Atletico Madrid secured an 11th Champions League triumph.

Lizarazu, who won the 1998 World Cup and European Championship in 2000 alongside Zidane with France's national side, believes his former team-mate has shown new personality traits since becoming a coach.

"As a player he was shy, but by becoming coach he realised he had to make the effort and be more expressive," Lizarazu told AS.

"It's an incredible change as a human being. Now I notice a person who manages others.

"And about the pressure, I do not think it's a problem. He is used to playing finals as a player. He was calm from the beginning, joking with Cristiano [Ronaldo] in the final of the Champions League before penalties.

"I was very happy to see him win the Champions League. Not for a technical or tactical issue, but an emotional issue.

"First it was his talent as a player and now as a coach - professionalism. From the day he said he would be a coach, he thinks every minute as a coach. That determination was noted from his first press conference. He had clear ideas."