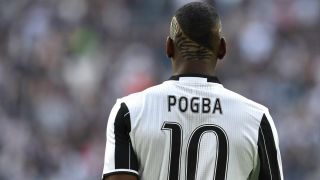 Real Madrid coach Zinedine Zidane says while Paul Pogba is still a Juventus player, anything can happen between now and the time the transfer window closes.

Zidane has stated his interest in France international Pogba, with Madrid expected to fight with Manchester United for the Juve midfielder.

Juve have reportedly set a €120million fee for Pogba, with United allegedly the favourites to sign the 23-year-old.

However, Zidane says Pogba is still a target for Madrid, but would not go into more detail about their plan for the Juve star.

"In this moment we are still working [on a move for Pogba], and I cannot say anything more," the Madrid coach said.

"Until August 31 anything can happen, but today he is not a Real Madrid player and I cannot talk about what will happen.

"I always say how things are, but now is not the time to talk about this. A lot of clubs are interested in Pogba.

"Real Madrid always want the best players. But we owe Juventus respect, and I can't say anything more out of respect."

Madrid are in the United States ahead of their International Champions Cup clash with Paris Saint-Germain in Columbus.

But Zidane confirmed James Rodriguez, Sergio Ramos and Luka Modric will not play, having only just joined up with the squad.