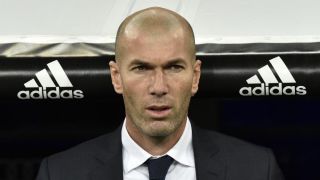 Real Madrid coach Zinedine Zidane has voiced his dismay with FIFA's decision to ban the Santiago Bernabeu side from registering new players in the next two complete transfer windows.

The sanction was handed down by the governing body's Disciplinary Committee as a consequence of breaches "relating to the international transfer and registration of players under the age of 18", but Zidane finds it hard to understand FIFA's verdict.

"The transfer ban seems absurd," the Madrid coach said at a news conference.

"I have been here all my life with my children. I think we will fix it next week.

"It is a bit annoying, but in the end I cannot do anything to prevent these things. Some things are hard to accept, but I am calm about it.

"What's important now is to shift our focus to Sunday's game. It does not make sense to speak about it now. We have to concentrate on the match versus Sporting Gijon."

Madrid have already announced they will appeal the FIFA punishment, denying any wrongdoing.

A similar punishment was imposed on Barcelona in April 2014, although the various appeals meant it did not apply to the Catalan club until the windows in January 2015 and the following off-season.

Madrid can still buy players – as Barca did with Aleix Vidal and Arda Turan during their suspension – but they cannot be registered, and therefore will not be eligible, until the start of the 2017-18 season.

The Bernabeu outfit were not the only side to be hit with a transfer ban by FIFA this week, with domestic rivals Atletico Madrid receiving the same punishment.