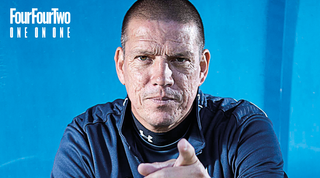 The Germany international – who had played in the World Cup final a few months earlier – took a knock to his thigh in a Boxing Day clash at home to Charlton Athletic, a 2-2 draw in which Ziege was sent off for a second booking in injury time.

Ziege would make just one Premier League appearance for Tottenham over the next 13 months but, as he tells FFT, football quickly fell down his list of priorities.

“I was close to dying,” he reveals in the June 2017 issue of the magazine. “I got a knock on my thigh. It wasn’t a big kick but my leg swelled up really badly after the match. I was in massive, massive pain. My wife told me to call the doctor but it was Boxing Day and I said, 'I can’t call him now'. My wife called him and he said we have to look at the pressure inside the leg and I should go to hospital.

“They operated on me, and I can’t remember too much about the next few days because they put me on a lot of medication. They told me if we’d left it another 30 or 45 minutes, they would have had to cut off the leg as otherwise I would have died. It was so scary and I had to have another operation five months later because the muscle was dead. They had to take it out and I had to start again.”

David Pleat had taken temporary charge of Spurs – following the exit of Glenn Hoddle – once the wing-back was finally fit again, but Ziege says one particular conversation with Pleat convinced him he would soon have to seek pastures new.

“When I’d come back from the injury, David Pleat was the manager and he was not playing me a lot. Then I did play [in a League Cup tie against West Ham] and he said to me, ‘I didn’t know you were a left-back’. I thought, ‘What?!’

“I realised that if he didn’t know that, I was not so important to his plans. I was keen to play [for someone] but I was settled in England and the kids didn’t want to move. I do miss it in the UK, though. The family has said to me that we would like to go back there one day in the future.”

Read the full interview with Christian Ziege in the June 2017 issue of FourFourTwo magazine, in which we profile Barcelona and Brazil superstar Neymar and his quest to take on Lionel Messi’s mantle as the best player on the planet. Also this month, we slip on a neon jacket and become a steward for a day at The Hawthorns, speak to Chelsea defender David Luiz about his successful return to Stamford Bridge, review 23 of the game’s maddest owners, hear from Manolo Gabbiadini on his sensational start to life at Southampton and remember when Man United stopped Liverpool from completing the Treble in the 1977 FA Cup Final. Order it now, and then subscribe!