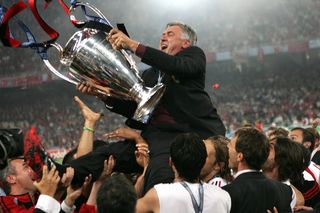 Carlo Ancelotti’s appointment as Everton manager was a shock because of his exceptional record, featuring titles in four different countries.

As well as enjoying plenty of domestic success, he’s also won the Champions League three times – twice with AC Milan and once with Real Madrid.

In this context, taking charge of Everton, a club that was just outside the relegation zone when he arrived in late December, represents a rather different challenge.

The scope of Ancelotti’s experience in working with world-class players at a variety of clubs was emphasised by his selections for a dream team of the very best he’s managed during an illustrious career.

Asked by Marca to compile a team, he found room for players from five of his former clubs – Parma, Juventus, AC Milan, Chelsea and Paris Saint-Germain.

There were notably no representatives from Real Madrid or Bayern Munich despite winning multiple trophies with both clubs.

Five of Ancelotti’s famous Milan team were selected – Cafu, Paolo Maldini, Andrea Pirlo, Kaka and Andriy Shevchenko – but Alessandro Nesta and Clarence Seedorf were among those to miss out.

Frank Lampard and John Terry helped Ancelotti to a Premier League and FA Cup double during his time at Stamford Bridge. Both also featured in Mourinho’s dream team.

Ancelotti encountered Gianluigi Buffon and Zinedine Zidane early in his career, at Parma and Juventus respectively, while Thiago Silva and Zlatan Ibrahimovic played for him during a much more recent spell at PSG.

In defence of the match report: they may seem old fashioned, but they are essential to football's history