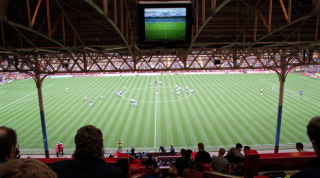 The first time you write a match report your head spins. Genuinely. If it’s supposed to be filed at full-time and the game turns out to be anything other than a 3-0 procession, then it’s a fraught experience during which all your articulacy and craft vanishes, and your fingers forget how to type.

That never really goes away. Afternoons begin with the hope of writing some flourishing, frothing masterpiece, but invariably end with the hope that all the full-stops are in the right place.

Let’s take a moment to define our terms: match-writing isn’t headers and volleys – it isn’t a literal description of what has just happened. Instead, it’s a swirl of ideas, perceptions, and conclusions which has been informed by the experience of actually being at a game, interwoven with the events which have taken place.

And yet even this evolved version is having to fight for its place. It’s being beaten into retreat by the assumption that everything worth knowing about a game can be obtained from television when, clearly, that’s not the case. No matter how football changes and irrespective of how technology advances to frame those improvements, the need to document the sensory experience remains as essential as it ever was.

Digital journalism has tried to adapt around changing habits and match-writing has certainly been affected. The trend now is for conclusions and ‘things learned’ rather than continuous prose and, by all accounts, that’s a change supported by page views and analytics. The implied need is for everything to be forward-looking and to have the longest possible lifespan. Never stop, never take a breath. Keep reacting, because that’s the only way to keep websites earning and writers employed.

It’s rational, but ironic. In the future, very little of the work from this current era of live football will have any use at all - it will have no lifespan at all. That’s a conclusion rather than a criticism, but it’s a depressing thought. It has nothing to do with quality of analysis or calibre of the authors, it’s just a consequence of an increasingly myopic direction. In 20 or 30 years, with the world confronted by some similar catastrophe and sport again suspended, would it be realistic to expect anybody to read about tactical tweaks and selection issues, or even the week-to-week dynamics of a league table?

Almost certainly not, but that’s where we headed. When the anthologies of the future are published, they will contain wonderful work on the game’s biggest issues and penetrative reporting into the macro problems of the age. There will also be a broad array of compelling features and interviews, all of which will bear comparison to anything from the past.

But the kind of writing that sketches the details of an occasion will be in short supply and that’s a great shame. Just because the demand for it isn’t quite the same, doesn’t mean than it is any less important – rather, just that the nature of that importance has changed. Match-reporting used to inform a reader of what had happened. Now, it’s a dynamic by which they can relive events first-hand, at a level beyond Ultra HD.

Actually, originally it was both. One of the finest Hugh McIlvanney articles was not about football at all, but the circumstances that led to Johnny Owen’s death, after his fight with Lupe Pintor in 1980.

The facts of that event are grimly simple: Owen was knocked out, he would leave the arena in a coma, and he would never regain consciousness. But McIlvanney’s commentary, written at the point at which it wasn’t obvious that Owen’s injuries would be fatal, still provides a ringside seat to the chaos today. Forty years later that’s some achievement. From the reader’s perspective, it’s also an amazing privilege.

That evening, McIlvanney was the camera’s lens while television was looking elsewhere. Contained within his reporting were details which would otherwise have been lost to time. The utterances from an uknown American journalist, for instance, who was awed by Owen’s bravery as he took punch after punch. Or one of the stretcher-bearers being pickpocketed as he helped carry Owen from the ring.

The portrait as a whole captures the acrid hostility of the occasion and the wicked violence in the air. To read it now is actually to smell the body odour, hear the baying catcalls from the crowd and – crucially – experience a very human response to what was unfolding. Unpleasant as that may be, it offers an opportunity to actually exist in those terrible moments and provides a vantage which television never can.
The fight still exists online and, naturally, it’s upsetting to watch and full of sights that can’t be unseen. But McIlvanney’s article is much more graphic and that’s a comment on the medium as much as it is the late, great man himself.

Thankfully, football rarely needs to be described in such ways, but it too can benefit greatly from the detail – even now, even with cameras covering every inch of grass and the footage lasts forever.

Think of Jonathan Liew’s reporting from Anfield, on the night Liverpool knocked Barcelona out of the 2019 Champions League. Or Sid Lowe’s dispatch from Camp Nou, when Barcelona performed their own miracle in turning around that 2017 tie against Paris Saint-Germain.

They’re well-known examples, but they’ve been chosen for good reason: they’re pieces of work that complemented games which already had everything. Their drama was such that further embellishment was really unnecessary and yet still, in matches which drew a combined audience in the hundreds of millions, the clatter of keyboards in the press box still managed to add some kind of additional texture.

That extends also to the ‘as live’ genre and the curation of detail which – otherwise – would fall between the broadcasting cracks.

During the 2018 World Cup, The Sunday Times’ Jonathan Northcroft kept a Facebook diary, which was subsequently published as Deadlines and Darts with Dele and remains even now, long after the tournament’s end, a thoroughly entertaining read. While there are all sorts of bits and pieces to take from the book, perhaps the two most memorable passages are those written in reflection of Lionel Messi’s goal against Argentina, and at the end of England’s penalty shootout victory over Colombia.

In each case, the entries are quite primal. They’re really just observations on how the sport looked and felt at those particular moments, in its rarest air. It was the precision of Messi’s touch which inspired the first entry. And, in that England game, it was the sound of professional players kicking the ball with their highly tuned technique that instructed the second.

It could be argued, in fact, that it’s never been more important to have exactly that kind of perspective. Especially in football, which has grown so important and so fast-moving that there just isn’t the time for such even-paced and subtle observation. But while quick context is important and everybody remains in thrall to whatever will happen next, it’s imperative to chronicle the look, feel and smell of these great days and breathless nights, and to properly defend the means by which their record is kept.

COMMENT No going back to normal: The way football works will have to change completely when this hiatus ends