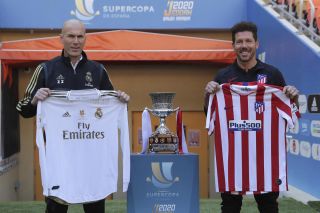 Zinedine Zidane insists he is a better coach in his second spell at Real Madrid ahead of his side’s Spanish Super Cup final.

Zidane’s side secured a convincing 3-1 win over Valencia in their semi-final tie earlier this week before Atletico struck twice in the last 10 minutes to record a 3-2 victory against Barcelona in their last-four encounter.

Real, who will be without Gareth Bale, Karim Benzema and Eden Hazard, head into the final on an unbeaten run of 15 matches in all competitions, while they have lost just once in LaLiga this season.

Zidane resigned as Real manager in the summer of 2018, just five days after becoming the first manager to win the Champions League in three consecutive campaigns.

But the Frenchman returned to the Bernabeu 10 months later and, on Sunday, will go in search of his 10th trophy as manager of the Spanish giants.

“I consider myself to be better than I was in my first stint and I’m progressing,” said Zidane on Real Madrid’s website.

“In life, and not just as a coach, we learn from situations and the people around us. I really like to listen to those who work with me because they’re very good at what they do.

“That allows me to develop as a coach and person. That’s my target. The question of being a lucky coach won’t change and that depends on how everyone sees things.

“I’m here to work and I enjoy what I do. I can’t influence anything else. I remain strong and convinced about what I do out on the training pitch.

“We’ve got a really good squad and, once again, we want to put smiles on our fans’ faces and that’s what we work for.”

Standing in Zidane’s way of his first trophy in his second stint at Real Madrid will be Diego Simeone’s side – boosted by their comeback win against Barcelona.

Atletico were heading for another defeat against the LaLiga champions with 10 minutes left on Thursday before strikes from Alvaro Morata and Angel Correa turned the semi-final tie on its head.

Speaking ahead of Sunday’s final, Simeone said: “There isn’t a more important game for Atletico Madrid’s fans, players, directors and coaches than this.

“We know Real Madrid very well. They have world-class players and a coach who’s a winner. Benzema, Bale and Hazard aren’t here but nothing changed. We’ll need to find ways to attack them and hurt them.

“I believe in my players. When I feel they’re in good shape, I fear nothing.”