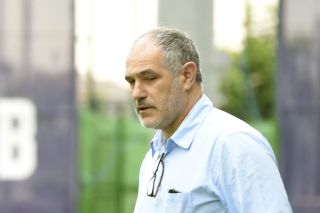 Luis Enrique's starting line-up for last week's El Clasico included five players in their 30s and an average age of 28.7 but Zubizarreta was keen to underline Barcelona brought in 22-year-old goalkeeper Marc ter Stegen and 24-year-old full-back Douglas Pereira in the close-season.

With all but two of the seven players on Barcelona's bench last week 25 or younger, Zubizarreta argued it was simply a coincidence Luis Enrique selected many of his older players in the 3-1 loss to Real Madrid.

"It's a temporary issue because if we had played the likes of Ter Stegen, [Marc] Bartra, Sergi Roberto and Rafinha then the average age would have come down noticeably," he told El Pais.

"We have players in different age groups and we are not just leaving the team to grow old, although admittedly the players we signed in the summer were experienced ones, with the exceptions of Ter Stegen and Douglas.

"But we are building a team for a season, not just one match."

Luis Enrique had led Barcelona on a brilliant start to the season before the Clasico defeat, as they went eight games unbeaten, without conceding a goal.

The Catalan club remain top of La Liga with 22 points, ahead of second-placed Sevilla on goal difference, while Real Madrid (21) are third.

Luis Enrique was brought in before the season to replace Gerardo Martino and although the former has tweaked Barcelona's set-up, in particular relying on Lionel Messi as more of a playmaker than goal-scorer, Zubizarreta claimed the 44-year-old is doing what the club expected.

"Luis Enrique was always first choice. Football is evolving and perhaps we needed to make some modifications in certain aspects," Zubizarreta said.

"That is what we have done with Luis because we have raised the intensity and maintained the pressure higher up the pitch."