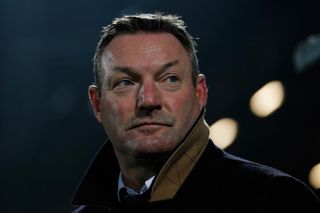 Ron Jans' men came from a goal down to seal the spoils on Sunday in a game that was severely delayed after fans threw flares onto the pitch in the early stages of the contest in Rotterdam.

The game was halted shortly after kick-off as the field was engulfed by flares and when proceedings did resume it was Ajax who took the lead in spectacular fashion through Ricardo van Rhijn's 30-yard drive.

However, the match was soon stopped for a second time due to objects being hurled onto pitch, leading the players to return to the changing rooms and Ajax director Edwin van der Sar to plead with the club's fans for calm.

It was Zwolle who took control of the contest when order was restored, Ryan Thomas levelling matters in the eighth minute before scoring his second to put Zwolle ahead.

And at the home of Ajax's great rivals Feyenoord it was a loanee from the Rotterdam club that put the game beyond all doubt, attacker Guyon Fernandez netting a brace to take his tally for the season to 12 in all competitions.

Ajax's humiliation was then completed in the 50th minute as Bram van Polen scored Zwolle's fifth from close range, putting further gloss on a display that will be forever etched in the club's history.