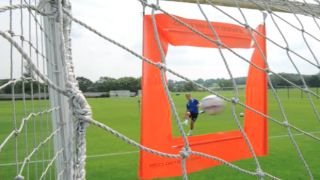 Training’s over. Everybody, including that quitter of a keeper, has retreated to the sanctuary of the changing room.

You want to carry on, determined to perfect that unsaveable top-corner strike, but were unable to carry a tyre and rope on the bus with which to fashion a homemade target. What to do?

The brainchild of former New Zealand defender Duncan Oughton, the assistant coach of MLS side Toronto, the Sweetshot 90 could be the answer.

Easy to set up, the adjustable clips attach to 90 per cent of goals, regardless of dimensions.

“Even without a keeper, it helps you focus instead of just ripping shots randomly,” Oughton tells FFT. “It gives you a real buzz: I nailed my second shot with it and started giggling like a schoolboy!”

“Anything that helps vary practice is great. We have a few bets where the loser buys the coffees to make things interesting!”

For more football tips see:
Andy Cole: Finishing a one-on-one
Jermain Defoe's six-step guide to striking
Michu: Break through the defence
Demba Ba: Hit the target every time
Rickie Lambert: How to hit the back of the net