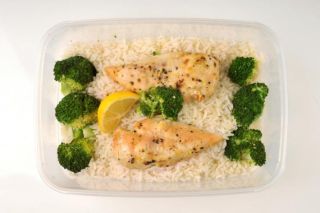 What you will need...

In the store cupboard

Lemon chicken & rice
When to eat: Tuesday & Thursday – training days
Cooking method
• Boil ½ cup of ice with the zest of ½ lemon for 12 minutes until tender.
• Season one chicken breast with salt, pepper and the rest of the lemon zest, then grill or oven bake until cooked through.
• Squeeze the juice of the lemon over the chicken and rice, and serve with steamed broccoli.

Expert’s view
“When performance is the primary goal, ingesting a meal rich in carbohydrate and low in fat is recommended,” says Dr Ian Rollo of Loughborough University’s Sports Science Institute.

When to eat: Monday, Wednesday & Friday

• Grill, poach or steam one or two salmon fillets for eight minutes.

• Combine a handful each of spinach, feta and beetroot.

• Drizzle with rapeseed oil and season with pepper.

“Inorganic nitrate, which may have benefits for health and performance, is abundant in beetroot and leafy vegetables.”

• Chop one onion, two peppers, one carrot and two garlic cloves and fry in a little olive oil for five minutes.

• Add a teaspoon each of cinnamon, cumin, ginger and paprika. Cook for a further five minutes. Add tomatoes and chickpeas and enough water to cover. Simmer with the lid on for 20 minutes, then serve with cous cous.

“After exercise, the main objective is to replenish and rebuild. The carbs in these meals will replenish the glycogen used during the match and the protein will help build new muscle.”

When to eat: Monday, Wednesday & Friday

• Brown the mince in a little butter or rapeseed oil. In the meantime, chop one carrot, onion and garlic glove.

• Set meat to one side and fry the vegetables in the same pan for five minutes. Return the meat to the pan with salt and pepper, a sprinkle of thyme, a dash of Worcester sauce and one can of tomatoes, and if necessary add a little water to cover. Simmer for one hour with the lid on.

“High in carbs and protein, this meal can be ingested 3-4 hours ahead of training, or the night before, with the aim of increasing the body’s energy store.”

• Combine three tbsp of almond butter, two tbsp of cocoa powder, 25g of whey protein and one tbsp each of honey and chocolate chips and a pinch of salt, then mould into golf ball-size portions.

• Store in airtight container in fridge for up to a week and eat when required.

“For players looking to maintain or build muscle mass over the season, these are great as a snack between meals or as a dessert.”

For more nutrition tips see:
The ultimate half-time snack
Eat for every occasion
10 Football Superfoods
Dried and tested to increase speed
Get the babies on board
Eat for energy and intensity
The ultimate matchday meals