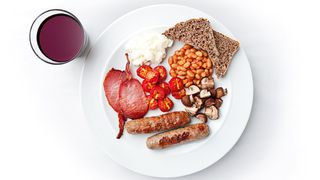 It may not sound appetising, but beetroot juice will do more than just wash down your breakfast – the purple fuel increases stamina and endurance, helping you to outrun the opposition.

Trim the fat, sidestep the frying pan and whack two slices of lean bacon under the grill. When you’re sweating from every pore, the bacon’s electrolyte sodium will kick in and stop the body from cramping up during a charge on goal.

Sorry, but you have to lose the tasty yolk as it’s high in cholesterol and fat. Scramble two protein-packed egg whites with a tablespoon of coconut oil. Your body will handily turn the oil’s fatty acids into fuel.

Instead of sizzling fatty pork sausages, opt for two lean turkey bangers. Don’t sigh: here comes the good news. Turkey is full of beta-alanine, which fends off lactic acid – the stuff that makes your muscles ache.

Grill five cherry tomatoes, full of phytochemicals to aid recovery, and a handful of mushrooms: their vitamin D will help to reinforce your bones against kamikaze tackles from the oppo’s hatchet man.

The carbs in half a tin of reduced sugar and salt beans will slowly release energy into your body, powering your legs for 90 minutes. Add a teaspoon of cayenne chilli powder to boost your metabolism.

Top up the carbs from your beans with a slice of rye bread, providing you with a steady supply of energy throughout the game. It’s a high source of fibre, too, and will make you feel full so you won’t be hitting the snacks later on.