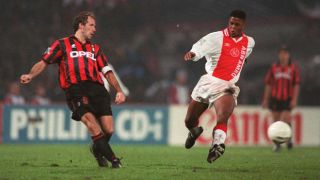 “A defender has to be brave. He has to be prepared to throw himself into tackles and battle with bigger players. You can improve your tackling skills by practising man-to-man combat with one-on-one tackling drills. As a defender you want to be aggressive and determined, but to make your tackles without fouling. If your opponent has the ball and you are the defender, he will try to take the ball away from you. When he makes his move, that’s when you have to act. Wait and intervene at the right time.”

“Marking is a dying art because of the emergence of zonal marking, but I think it’s important for a defender to learn this discipline. When you play zonal marking you’re not watching your opponent, but when a cross comes in you have to look at him – if you don’t, it’s him who scores! So you have to be good at covering ground when necessary. And remember: if a player is bigger than you and good in the air, they may not be very strong technically – so you want to control the game on the ground if you can.”

Work as a team

“How fast you are depends on how you move – forwards, sideways and backwards. To gain an advantage in a one-on-one situation you have to be rapid at turning. It’s not just about being fast as an individual, but as a team. At AC Milan we reached a level where we were one man, moving in line, at the right time, in all directions. In training we used to start one vs one, than two vs two, four vs six, four vs eight. Playing four versus eight taught us how to stop the opposition and forced them to play long ball.”

Prepare for the worst

“Concentration and confidence are fundamental for a defensive player. The more you think as a defender, the more careful you are and the easier it becomes. You know when it’s better to mark your opponent and be aggressive or to take your time. Training is the secret to improving self-belief because you simulate game situations that you will face in a match. Prepare for the worst in training so when it comes to game day you’re calm – you’re prepared. You know how to deal with any situation.”

Attack from the back

“Being comfortable with the ball is important for a defender, because you can start attacks. Press forward with the ball and play short passes into your midfielders, or go direct to your strikers. Players in a well-organised, compact team are never more than 10-15 metres away from each other. When the other side has the ball, you press high up the field as a team. Watch the way Barcelona play – when they lose the ball they immediately press high up the pitch and cause problems for the opposition. Don’t retreat and invite pressure. Be positive.”

Prepare off the pitch

“It’s important to be in good shape. How you look after yourself means a lot. Diet and professionalism are essential if you want to keep playing for a long time. How you train and prepare is just as important as what you do on the pitch. When I prepared and trained well, I was more confident: I’d run out onto the field and I wasn’t afraid. If the team buys into this ethos and you all believe in it, there’s harmony between all the players and the team becomes stronger.

For more football tips:
Rio Ferdinand's Ultimate Defender
Sylvain Distin: Dominate your opponent
Franco Baresi: How to defend like a master
Nemanja Vidic: Tackle any threat
Ashley Cole: How to handle every opponent