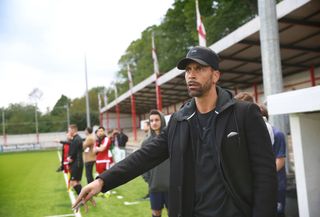 “There are some guys who reach eight out of 10 once every few games. They’re good players, but great ones perform at that level and beyond every single week. These are the players who will help teams win championships. Also, great players shine when it matters – you can always count on them to pull out all the stops when it’s most needed throughout the season. Great defenders seem to get the other players around them playing better.”

“Of all the attributes defenders need, concentration is the most important. I keep talking all through the game. Even if I’m talking rubbish – and often I am! – I keep going. It helps to keep you and your fellow defenders on your toes. You’re barking instructions – “left”, “right”, “step up” – that are designed to help your team-mates, but at the same time they keep you alert. Lapses in concentration are the most common errors among young defenders and this can lead to conceding a goal.”

“The best defenders can smell danger before it arrives. They position themselves in places that make it difficult for midfielders to play balls through gaps, or they step in front of a forward before a pass is even played so they can nick the ball off his toes. When I was a kid I had a coach who would tell me that if my shorts weren’t dirty at the end of the game then I’d not played well. In my mind, it’s the opposite. Ideally, I want to come off the pitch with spotless shorts.”

“You have to be willing to put your foot in when you need to or throw your head into situations where you’re likely to get hurt. There have been occasions where I know I’m going to get clattered if I make a challenge. But what can you do? You have to make that challenge. I don’t know how some players can jump out of a challenge. I just can’t get my head around how you could let yourself do that. I’d be embarrassed. If the ball’s there to be won you simply have to go for it.”

“Playing alongside the right partner can make a huge difference. I’m a big believer in having two different types of central defenders. Ideally you’d have one who likes to attack the ball and win headers, while the other sweeps up and reads the game to intercept trouble before it gets serious. I don’t think it works as well if you are  too similar. You need a balance. We’ve had that at United with myself and Nemanja Vidic. He’ll put his head through a brick wall to make a clearance, but can definitely play a bit as well."

Recommended for you:
Sylvain Distin: Dominate your opponent
Franco Baresi: How to defend like a master
Chris Smalling: How to be the complete defender
Nemanja Vidic: Tackle any threat
Rio: The thinking man's guide to defending
Ashley Cole: How to handle every opponent