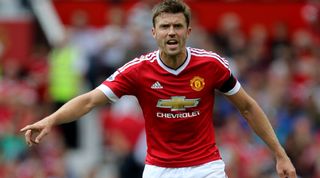 “If you’re playing the holding role in a central three in midfield, you’re screening the two centre-halves and stopping the service getting to the opposition’s forwards. If the game is being played at 100mph, don’t get carried away with what’s happening – positioning is the key. If you can get on the ball and support the attack then go for it, but be aware of where the danger is if the move breaks down. If they counter-attack you’ve got to be able to get in a position to help the defence.”

Work with your defence

“If the opposition floods the midfield and one of their forwards drops deep, you have to get information from your centre-halves. If you’ve got to keep looking over your shoulder you can’t see what’s happening in front of you. Angle your body so you’re in a position to cut out passes to their centre-forwards, but also be able to face the play. If the opposition get the ball in between you and your centre-halves, they’re running forward and you’re running back – and then you have a problem.”

“Avoid getting dragged out wide, leaving space in the middle for players to run into – this puts your centre-backs under pressure. Sometimes the danger is out wide and you’ve got to deal with it, but make sure you’ve got cover. But if you’re being hit on the counter-attack and you’re the only midfielder, you don’t want to be going out wide – let them have it and try to delay them so you can get bodies back.”

“Shut off the angles. If you press the player on the ball you’re creating space in behind you and they can pass into that space. Force the opposition to play the ball where you want. Do this by stepping off the player you’re marking and drawing them into a pass, then trying to intercept it. If their biggest threat is out on one wing, focus on defending that area, pushing them to the other side. If they have someone playing off the front, like Messi, cut the space through the middle by bringing your wide men in, forcing them out wide.”

“If you’re chasing the game you want to keep the other team under pressure, so you want to keep the ball moving. Press high up the pitch and don’t let them out of their half. As a holding midfielder you have to be in a position to receive the ball and influence the play, but at the same time being in a position so that if the play breaks down, you’re covering. From your position you can see the play both ways, so even if you haven’t got the ball you can tell your team-mates what options they have.”

“When you’ve got the ball you have to think, ‘How far forward can I play?’ Sometimes a 10-yard forward pass can be better than a 60-yard forward pass that doesn’t go anywhere. The short pass might take three midfielders out the game and your attacking midfielder running at the back four. If the game is stretched and has been end-to-end then don’t go long, because if it gets cut out they’re attacking you again. This is the time to play a five-yard pass and slow the game down. However, don’t be afraid to take a risk and try an incisive pass.”

For more football tips see:
Aaron Ramsey: Overrun the opposition
Marco Verratti: How to be a deep-lying playmaker
Shield the ball like Philipp Lahm
Lucas Leiva: The spoiler