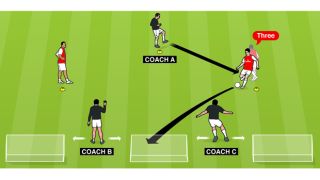 Helps with control, awareness and decision-making

“This is a drill we used at Barcelona. Coach A passes to either player A or B, who has to be on his toes, side-stepping left or right. If coach A passes to player B he must turn to look at coach B or C and see how many fingers they’re holding up. He must then turn back to coach A and shout the number out before he receives the ball. Then, he has to control the pass on the turn and strike it into one of the empty goals. Coaches B and C have to be on the move, shuffling side to side or pressuring the player from behind to simulate game conditions. The coaches can also block off one of the goals to reduce the player’s options.”


Drill two: Sharp shooting
Helps with first touch, control and finishing
“Player A stands inside the D and gives the goalkeeper a ball. The goalkeeper throws the ball at him at different speeds and heights. The player has two touches – one to control the ball, one to finish. The ball has to be controlled inside the D – if he fails to do this, the ball goes straight back to the goalkeeper. The player is allowed to try and finish first time should he wish. You can progress the drill by positioning servers on the byline and around the 18-yard-box. This simulates a match scenario where the ball drops to you on the edge of the penalty area – you don’t have much time and space to control and finish.”

Helps with control and passing

“Using four cones, mark out an area of 10 x 10 metres. Position a player on each of the cones. Give a ball to the players standing on cones A and C. To start the drill, player A passes to player B and player C passes to player D. The two balls continue to move around the square in a clockwise motion. Each player has two touches, one to control, one to pass. When you’re receiving a pass, open your body out – this will help you manoeuvre the ball around the cone and then pass to your team-mate. Remember, all it takes is one poor touch or one poor pass and the other ball will catch up with you.”

Mikel Arteta wears the PUMA King, available at ProDirectSoccer.com. What’s in your nature? To find out if you’re a Control Freak like Mikel, head to facebook.com/PUMAfootball