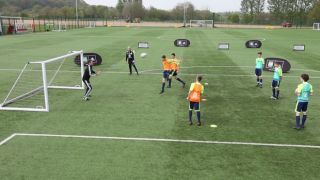 Being the central striker in Real Madrid’s star-studded attack, Karim Benzema needs to be as good with this head as he is with his feet. And it’s not all about stuffing it into the back of the net.

Accurate attempts on target are only part of the package. Top players like Benzema can lay the ball off for others, create goalscoring opportunities, defend and bring it under control for themselves – all with their head.

Coerver Coaching’s co-founder, Alfred Galustian, has studied the French striker’s game and devised a drill to help you get your head control sharp and effective.

For more tips on heading see:
Out-jump a giant
Head it like Drogba
Andy Carroll: How to use your head
Rise above the attack
Michael Ballack: Dominate the skies
Pele: How to head like the King