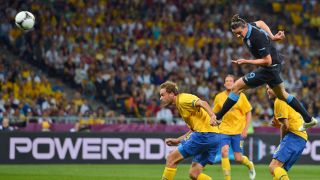 “When going for a diving header, it might sound obvious but the main thing you want to concentrate on is making contact. Then it’s all about timing. It’s all about when the ball comes in: if it’s got pace on it you just guide it in; if it’s coming in slow you have to put the power in through your body. You generate this power by making sure you dive towards the ball rather than letting it hit you. The faster the run before you dive, the harder your header will be.”

“The best thing to do when heading it at the far post is to loop it back to the front post – where it came from. You’re hoping that it either goes in or someone gets a nick on it. When the ball’s coming in, keep your eye on the ball. The defender will have to watch you and the ball, so if you keep moving you should be able to get ahead of him. If you’re tightly marked, give him a little nudge as the ball comes over.”

“Before the ball comes out from a goal kick or free-kick to us, I’ll talk to [Luis] Suarez about where he’s going to run, where I am standing and whether he’ll run on the inside or outside. Based on that, I try and put it in that area when the ball is kicked. The key when flicking the ball on is just getting enough contact to get it over your defender and into the space behind him. To get the header in, it’s key you pin your defender behind you so use your arms to keep him from getting to the ball first.”

“The first thing to remember when attempting a glancing header is that pace needs to be on the ball – if not, it’s unlikely to beat the goalkeeper. Again, it’s all about timing as you’re not generating the power yourself in this situation. What makes a glancing header easier is if you’re running towards the ball – from back post to front post – as it’s much easier to help it on its way.”

“This is something I practised a lot when I was younger and it’s helped with my game now. With these sorts of headers, where you’re meeting the ball full-on, all the power comes from your neck. You do this by sticking your arms out and pulling them towards you while powering your head forward with your neck. And try and keep it down – it’ll be much harder for the keeper to stop it as he doesn’t know where or how high it’s going to bounce.”

“There’s no finesse about defensive headers. It’s all about getting as much power on them as possible so you can get it out of the danger area. It’s a bit more difficult as you’re not just looking at the ball, you have to keep an eye on the player you’re marking too. But it helps being a striker in this situation as I can predict where people are going to run, so I try to get there first.”

For more football tips see:
Olivier Giroud: How to create and conquer
Head it like Drogba
Pele: How to head like the King
Use your head like Karim Benzema
Zlatan Ibrahimovic: How to play as a targetman