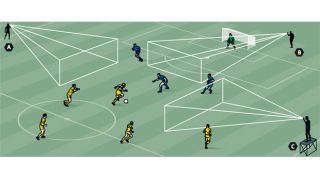 Get it out wide

Film your training sessions and matches with a wide-angle, 20 yards behind the touchline on either side. This will allow you to see where every player is on the pitch at every moment of the game. If you zoom in on the ball you cannot see what your strikers are doing if the opposition is attacking.

Poor observation can lead to poor instruction, resulting in poor performance. Film the action from as many different positions as possible. Incidents can look a lot different depending on where you’re looking at them from. So if you’re filming a set piece session, use two to three camera phones from different angles: either side of the pitch and behind the goal.

Get off the ground

Analysing games from the stands enables me to point out tactical information the coaching staff may not be able to see. We would use safe scaffolding but either a club house nearby or step ladder would work. Filming from a high vantage point can make all the difference as you can see all the play.

Look at the movement of players off the ball and how they react when the ball is in certain areas. Don’t always follow the ball – the reason goals are scored and conceded can often be tracked back two or three phases rather than the final ball and finish. Dedicate some filming sessions to following the midfield and attach even when their not in possession to track their work without the ball.

Any relatively recent smartphone will shoot hi-def video but the Xperia Z’s waterproof chassis makes it a good choice for capturing wet and windy training sessions from the side of the pitch. HD video on the 5in screen is clear and bright, which should make it easy to pick out exactly who’s been ball watching.

This app allows you to highlight just the key moments by editing the footage right there on the phone.

While it’s aimed at extreme sports types the combination of a wide-angle lens and plenty of mounting options make the GoPro ideal for fixing to a fence or railings close to the pitch, plus it’s so tough it won’t break if someone hoofs the ball at it.

Team it with: GoPro App (£free)

Control your GoPro remotely via your phone and even use its screen as a viewfinder.

Don’t be fooled by the XA10’s diminutive dimensions; there’s enough power here to shoot and store nearly six hours of the highest of hi-def footage on its built-in 64GB memory. If you want to hear every on-pitch shout there’s even a detachable handle that also adds inputs for professional-quality microphones.

This bendy-legged tripod allows you to attach your camcorder to practically anything.