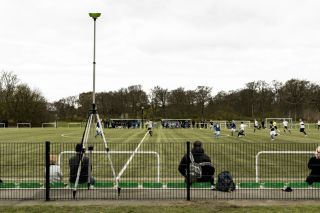 Have you ever scored a 30-yard screamer and wished it had been caught on camera? Well, your greatest moments on a Sunday League pitch can now be captured without hiring a camera crew to film your games.

New cutting edge technology from Copenhagen startup VEO allows you to place a 4-metre high tripod by the halfway line, consisting of two 4k cameras inside a box, which record games using a 180-degree panoramic view of the whole pitch.

While cameramen normally swivel to follow the action, AI technology enables the camera to track and detect the ball and players on the pitch and then rotate to follow them accordingly.

“Less than 1 per cent of all football matches are recorded,” says Veo co-founder and CEO Henrik Teisbæk. “This is because in order to record a football match properly, you need a cameraman to be filming from an elevated position for 90 minutes, and then be able to edit the footage afterwards.

“Most teams simply don’t have the resources required for this, meaning that millions of goals and unique footballing moments are never viewed or shared by the players.”

However, there is one catch. The digital zooming reduces the quality of the footage compared to those you will see on your TV screens, but Teisbaek says the idea is for players to view it on smaller screens on their smartphones.

“Since the zooming is done digitally, the output pixel quality is reduced. However it’s important to stress that the recordings are not meant for professional TV broadcasting and that the reduced video quality format works really well on devices with smaller screens.”

The big question is, how much will it cost your team to be able to film and watch your games back every week? The cost of an annual subscription starts at £999 and VEO will begin taking pre-orders during the Soccerex convention in Manchester from September 4-6.