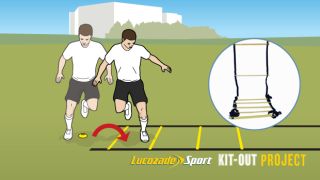 “Plyometric training can help players beat their opponents to the ball at the most decisive moments of the game.

Having the ability to accelerate quickly and decelerate sharply is the difference between success and failure.

Explosive power is the key to unlocking these skills. If you reach your top speed quickly, you’ll be able to chase opponents in possession, out-jump them for headers and win 50/50 tackles.

Sometimes it doesn’t matter whether you’re more powerful than your opponent, it’s whether you can generate the power quicker than them.

Plyometric training won’t just help you become more explosive, it can also help you build a more robust body. And the stronger your body is, the less likely you are to pick up a soft-tissue injury.

Whatever level you play at, speed kills. Use this ladder drill I’ve put together and you can earn that weapon.”

Place a cone a yard away from the first rung of the ladder. Stand side-on to the ladder.

Bring your left foot off the floor and stand on your right. Start to drop down as if you were about to perform a single leg squat and jump to your left, landing on your left foot in between the first and second rungs of the ladder.

Quickly spring back to the start position, landing on your right foot. Repeat the process, but this time land between the second and third rungs.

For the third and fourth jumps, land between rungs three and four.

Work your way along the ladder. The further the distance the more difficult it will be to land and perform explosive movements quickly.

Want some equipment to go with these drills? Lucozade Sport's Kit-Out Project can help. Visit www.lucozadesport.com/kitoutproject to find out more.

Rev up your early-season engine