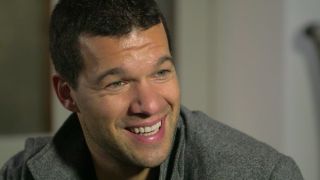 Michael Ballack was armed with the complete range of midfield attributes. Adept with either foot, strong in the tackle, deadly in front of goal, powerful in the air and capable of picking a pass. He was an all-round talent.

The former Chelsea and Bayern Munich player moulded himself in to the complete midfielder by making himself an asset to his team in both penalty boxes.

“When you have offensive qualities it’s a important you work on your defensive qualities because the coach knows he can play you in certain systems. It’s a big advantage to have,” he told FFT.

For more on what it takes to become the finished article watch this video interview with Ballack.

Also see:
Andres Iniesta: How to boss the midfield
Patrick Vieira: How to be a midfield destroyer
Ramires: Stand up to the big boys
Mikel Arteta: Pass your opponents off the park
Yaya Toure: Dominate the middle of the park
Scott Parker: Maximise your potential
Jack Wilshere: How to keep possession
Michael Carrick: Protecting the back four
James Milner: Getting the best out of training
Wesley Sneijder’s key to consistency
Jack Rodwell: How to play box-to-box