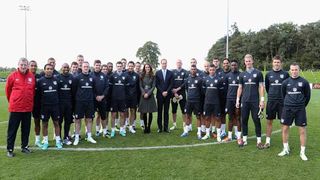 The Duke and Duchess of Cambridge helped mark a “momentous occasion in the history of The FA” when they officially opened St. George's Park on Tuesday.

The Royal Party visited The FA's new 330-acre national football centre on the outskirts of Burton upon Trent, joining specially invited guests to celebrate the launch of the new home for the 24 representative England teams.

Local community figureheads and young players met the Duke of Cambridge, who is The FA's President, and the Duchess of Cambridge before they greeted staff from The FA, Hilton Hotels and Spire Healthcare, who operate the three main facilities at St. George's Park.

They then met England Manager Roy Hodgson and his squad as they trained at St. George's Park for the very first time ahead of tonight's game.

Hope Powell, England Women’s National Coach, was also joined by a number of her squad who met Their Royal Highnesses as they toured the facility, including the community use pitches and Sport England pavilion, the Hilton and Hampton by Hilton Hotels and the Spire Perform rehabilitation centre.

FA Chairman David Bernstein said, "The opening of St. George's Park is truly a momentous occasion in the history of The FA. Next year we will celebrate The FA's 150th anniversary, and this moment will be as significant as any that has gone before us in the last 149 years. We are particularly delighted that both the Duke and Duchess can join us to open this facility."

Three Lions boss Hodgson is pleased coaching has been recognised as fundamental to the development of future English players: “For a country like England, which has a great football tradition and a great football coaching tradition, it has not been good that we don't have our own home of coaching – a home of English football. Now we have it, and I’m really hoping it is going to make a major difference to people’s perception of the importance of coaching.”

Want a closer look?
You can share the experience by taking an exclusive virtual tour around new £100 million football facility. The unique 360-degree tour takes you on a journey around the Staffordshire site, providing a behind-the-scenes insight into the new home of the England teams.

You can look out on to the replica of the Wembley pitch where the Three Lions have trained, explore the dressing rooms and discover the full-size indoor pitch, 60m sprint track and suite of sports-science and rehabilitation areas.