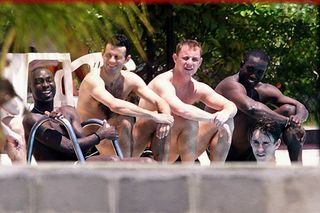 Think of your wallet

Unless a Russian billionaire bankrolls your club, leave the US well alone. “Some excellent European destinations are within an hour’s flying time from UK airports,” says former Swansea defender Matt Bound, now of TeamTours.co.uk.

Bare necessities will do

Prima donnas can forget about five-star hotels – this is Sunday League. “Hostels, low-budget hotels, caravan parks and even dorms are perfect for keeping costs low,” says Bound. “Most teams go for a three-night stay.”

You’ve had your fix of local culture – now let loose and swap the protein shakes for a few pints. Bound says: “There are beer festivals in most major European cities during the summer, which are perfect for large groups.”

Time to kill before your night out? “Stadium tours always go down well – especially PSV and Ajax,” advises Bound.

Bunk up. “Share a room with someone and you really get to know them. Me and Yorkie were room-mates and hit it off, which helped us on the pitch.”

Leave the gaffer at home. “The best trip I went on was United’s tour of Australia in 1999, after we won the Treble – because Fergie didn’t come. We had a lot of fun!”

Let your hair down. “At Wimbledon the players trained hard and partied hard. It built a team spirit which transferred to the pitch if we were up against it.”

Catch some extra Zs. “It takes your body one day to recover per hour of time difference, so factor that into your training schedule.”

What happens on tour, stays on tour

When Brits, booze and sunshine get together, things can get messy – so learn from these teams’ mistakes

A three-day reward for reaching the League Cup final turned into a boozy session that culminated in Stan Collymore letting off a fire extinguisher in a hotel bar. The Foxes were orderered to leave, 24 hours into their stay.

Moral of the story: Don’t pretend to be a fireman while under the influence.

England ‘prepared’ for Euro 96 by hitting the booze hard in Asia. The players were hammered there and by the UK press, after Teddy Sheringham, Paul Gascoigne, Robbie Fowler and others were pictured having drink poured down their necks.

Moral of the story: Leave dentists’ chairs to dentists.

City players partied in style during a five-match tour of Italy. With the beer flowing, a play fight broke out between Niall Quinn and Steve McMahon. One push too many saw Quinn send his team-mate flying through a shop window.

Moral of the story: Always remember to take out holiday insurance.

Staying fit on the beach