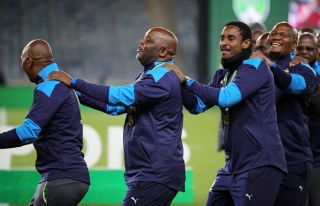 Pitso Mosimane rocked South African football on Wednesday when he announced his exit from Mamelodi Sundowns. Jingles is now expected to sign with Egyptian giants Al Ahly and he is looking to take Rulani Mokwena and two other members of his technical team with him.

It is believed that Mosimane has been given the greenlight by the Egyptians to start assembling his backroom staff with reports suggesting that he is keen to take Mokwena with him despite the young coach only recently re-joining Sundowns from Orlando Pirates.

Today we say farewell to one of our own, @TheRealPitso!7 Years of unforgettable memories that we will remember for years to come - for this we say #ThankYouPitso#Sundowns pic.twitter.com/i4TMTIi48OSeptember 30, 2020

Mosimane has also picked out fitness trainer Kabelo Rangoaga and performance analyst Musi Matlaba to join him on his new project in North Africa. The trio, however, all have contracts with Sundowns and it remains to be seen if the club president Patrice Motsepe will allow them to leave as he has done with Mosimane.

According to SoccerLaduma, Mokwena will, however, not be joining Mosimane in Egypt as he is just a couple of months into a four-year contract and Motsepe is keen to keep the core of the backroom staff.

Mokwena spent three years at Orlando Pirates as an assistant and later interim coach before a brief spell at Chippa United as head coach and is reportedly keen on remaining with Downs. Another one of Mosimane’s assistant coaches, Manqoba Mnqgithi, has also recently signed a four-year deal, and it’s not expected that he will leave.

Rangoaga and Matlaba futures are also up in the air but after Motsepe said in a statement that the club would make further announcements regarding Mosimane’s replacements, the issue is expected to be sorted soon.

The season kicks off on October 17 with the MTN8 and Sundowns will be hoping to have a settled technical team in place by then.