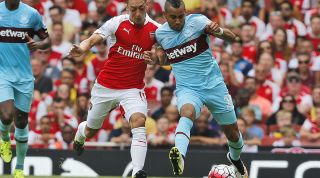 So maybe title talk is a little premature after all. For here, Arsenal got their 2015/16 season off to the worst possible start with a 2-0 home reverse to West Ham, who had previously lost their last five visits to the Emirates Stadium.

Even last season, when a dreadful run of just four wins from their opening 12 games left them out of the running to challenge Chelsea, they squeezed past Crystal Palace on the opening day.

This game, however, took a sorry twist for the Gunners two minutes before half-time when Petr Cech – cheered loudly after his first touch of the game – became a rare villain by haplessly running into no-man's land from a Dimitri Payet free-kick and allowing Cheikhou Kouyate to head in an easy opener.

Arsenal concede from their first shot on target faced of the season, just like last year.August 9, 2015

Arsenal's first half had consisted of struggling to negotiate a packed midfield and, on the occasions they did, wasting their opportunities to break the deadlock. It took until the 33rd minute for their first effort on target, a Per Mertesacker header.

After the interval they paid the price again after Alex Oxlade-Chamberlain – the Gunners' best player in the first half – gave away possession on the edge of his own area and allowed Mauro Zarate to fire past Cech, who may well have done better with the effort. From there there was no way back; Slaven Bilic's Hammers defended resolutely from there on in, and a combination of Adrian and some superb blocking kept the east Londoners' clean sheet intact.

"Overall we were punished," groaned Wenger post-match. "We gave two very cheap goals away. West Ham were a bit sharper than us, more advanced in their preparation. We were not quick in our passing and then we were punished for it. The concentration was not there on the set-piece. We have enough experience at the back, not just Petr Cech. We were not good enough, we were not convincing, and West Ham played well."

A final word for West Ham's Reece Oxford, the 16-year-old born after France '98 who's only recently sat his GCSEs and became the Premier League's seventh-youngest player ever by starting here. The youngster didn't look out of place at the base of West Ham's midfield, misplacing only one of his 21 passes and chipping in defensively with 3 tackles, 3 interceptions and 2 blocks inside his own area. Not a bad afternoon's work to tell his mates about.