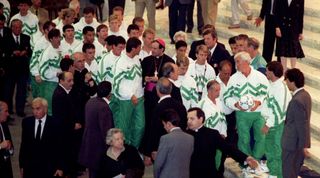 You beat Romania in the second round; then you’re off to Rome to play the hosts in the quarter-finals of the World Cup and meet the Pope. Er... ?

I know, it was all a bit crazy. Just qualifying from the group stage was pretty incredible and as we prepared for the Romania game in Genoa, Big Jack joked with our physio Mick Byrne that should we win and go to Rome, he’d get Mick in to meet the Pope. Mick was a very Catholic guy and laughed it off as tongue-in-cheek, but as time went on and we did win, the idea got some momentum and suddenly there we are at the Vatican.

What do you mean by "momentum"?

We had a guy who travelled with the squad, a Monsignor Liam Boyle, who knew someone at the Vatican and it snowballed from there. Mick was in shock, especially as we got treated so well. We were allowed access where the public wouldn’t usually be allowed – it was an amazing place with a real wow factor.

The footage shows you all in your team tracksuits. Was it not suggested that you wear suits?

What did it mean to the squad?

Well, if you're a religious person, going to the Vatican is one thing but meeting the Pope is an honour beyond comparison. My wife and son came along too with all the families and joined us in the biggest auditorium you’ve ever seen. It was an experience.

He was as excited as us all but the only thing was I don’t think he knew just how long we’d be there. We were there for three hours or so, which maybe wasn’t the idea preparation the day before a World Cup quarter-final. There were so many people and you have each group there introduced and then bishops from all over the world speaking, so it takes a very long time.

How were you introduced?

They just said we were there and so the Pope's waving over at us and then we’re told to hang on at the end. The auditorium emptied out and there we are alone with John Paul – who, by the way, was a massive football fan. He spoke to Packie Bonner and had Mick Byrne clinging on to his hand for dear life. Mick was so moved and having kissed the ring, wouldn’t let go!

Did you sense it meant more to the Irish lads in the squad, who were maybe more accustomed to the Catholic faith?

Oh no, I was bought up a Catholic. As a squad we used to have Mass. I’m not saying everyone was religious but even if you weren’t, meeting the Pope is still a special thing to do.