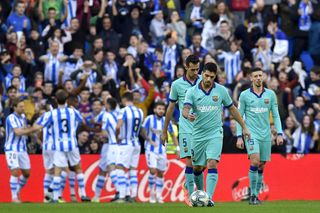 LaLiga leaders Barcelona saw a six-match winning streak halted after a 2-2 draw at Real Sociedad – which could see them knocked off the top of the table ahead of El Clasico.

Barcelona boss Ernesto Valverde had warned Saturday’s trip to San Sebastian would be a stern test, and so it proved.

Mikel Oyarzabal had given the hosts the lead through a 12th-minute penalty, but Antoine Griezmann equalised ahead of half-time, scoring against the club where he began his career.

Luis Suarez put Barcelona ahead shortly after the restart, knocking in a square pass from Lionel Messi, but Alexander Isak levelled things up at 2-2 after Marc-Andre Ter Stegen had failed to deal with a cross.

Barcelona will be replaced at the top of the table by Real Madrid if their rivals win at Valencia on Sunday, with Los Blancos set to come to the Nou Camp on December 18.

Elsewhere, Athletic Bilbao played out a goalless draw against Eibar, while in Saturday’s lunchtime fixture, a late goal from Enis Bardhi gave Levante a 2-1 win at Granada.

In the Bundesliga, Philippe Coutinho scored a hat-trick as Bayern Munich came from behind to thrash Werder Bremen 6-1 at the Allianz Arena.

Milot Rashica had put the visitors ahead in the 24th minute, but Coutinho equalised just before the interval and Robert Lewandowski got back on the goal trail to make it 2-1 in first-half stoppage time.

Coutinho, on loan from Barcelona, chipped in a well-taken third goal after 63 minutes, and Lewandowski and Thomas Muller were also on the scoresheet again before the Brazilian forward completed his treble with 12 minutes left.

Bayern move up to fourth, with Borussia Dortmund still two points ahead after their 4-0 win at Mainz, where England forward Jadon Sancho was again amongst the goals.

Saturday’s late kick-off saw RB Leipzig win 3-0 at Dusseldorf, which puts them top above Borussia Moenchengladbach, who travel to Wolfsburg on Sunday.

Bayer Leverkusen went down 2-0 at struggling Cologne – where both Aleksandar Dragovic and substitute Leon Bailey were sent off. The derby triumph guided the Billy Goats off the foot of the table.

Jurgen Klinsmann secured a first win as Hertha Berlin beat Freiburg 1-0, while Paderborn drew 1-1 at home against Union Berlin, a result which leaves them at the bottom.

Gervinho scored a last-minute winner as Napoli started life under new manager Gennaro Gattuso with a 2-1 home defeat against Parma in Serie A.

After a delayed kick-off at the Stadio San Paolo because of roof tile repairs following storm damage, Dejan Kulusevski fired Parma in front, with Napoli defender Kalidou Koulibaly then forced off by a thigh injury.

Parma, though, snatched all three points after Gervinho broke away following a corner to play a one-two with Kulusevski and slot in a dramatic winner.

Elsewhere, a late goal from Manolo Gabbiadini gave Sampdoria a 1-0 win at Genoa to keep them out of the bottom three.

Nemanja Radonjic’s second-half goal helped Marseille draw 1-1 at Metz to maintain their unbeaten run, but they missed the chance to close up on Ligue 1 leaders Paris St Germain.

Amiens and Dijon drew 1-1, while Monaco drew 0-0 at Angers and it also finished goalless between Brest and Nice.