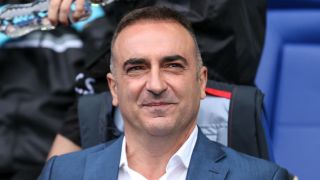 The Portuguese boss was named as the surprise successor to the sacked Paul Clement on Thursday, just four days after he was dismissed himself at Championship side Sheffield Wednesday.

Carvalhal has been appointed initially on a deal until the end of the season, with Swansea retaining the option to extend his stay.

He takes over a side bottom of the Premier League with just 13 points from 20 matches and five from safety, but Carvalhal is optimistic he can turn things around at the Liberty Stadium.

"In this moment, maybe if you ask 100 people who follow football, they will say Swansea are going to get relegated," Carvalhal, whose first match is a trip to Watford on Saturday, told the club's official website.

"This is the general idea. Maybe some people will say we need a miracle. But when things are in the hands of men, it's not a miracle you need.

"It's in our hands and we can manage things. We don't need divine help.

"We need strong commitment to move things forward. I promise we will try very hard to change things around."

CC on the challenge ahead:"All jobs are tough, and this one is very hard, but I like a challenge and that is why I am here." December 28, 2017

Carvalhal twice tasted play-off disappointment with Wednesday, including a loss in the final at the end of his first season, but he is motivated by the challenge of coaching in the Premier League.

"I feel very motivated, this is the word," he added.

"It will be a difficult challenge. We know the position we are in at the moment, but we can do it.

"It will be tough and we will need the support of everybody. We will try to show strong commitment from us and from the players on the pitch, and of course we need big support from the fans because they really can make the difference.

"This competition is very hard and we are not in a good position. We don't promise anything, but we will work hard and try to play good football so the fans can recognise our identity on the pitch."