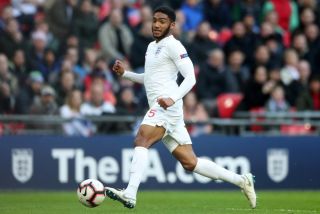 Joe Gomez insists England cannot abandon their philosophy purely because of the defensive errors that cost them a place in the Nations League final.

Both John Stones and Ross Barkley made high-profile mistakes in Thursday’s semi-final defeat to Holland, with both blunders leading to goals for the Dutch.

Speaking after the 3-1 extra-time loss, England boss Gareth Southgate said he would continue to ask his players to play out from the back, insisting his side “didn’t lose the game because of the philosophy.”

Gomez backed up his manager’s words and said the change in approach is what has led to two semi-final appearances in the space of a year.

“Clearly you could just play it long, but I don’t think that is the way,” he told talkSPORT.

“It is clear that we can’t undermine how much progression there has been in the last couple of years and the reason behind that is obvious – we play a different style of football than we have done in previous years.

“That is down to playing football, playing out from the back and dominating possession and I think, on the flip side, if we changed the way we play and started playing long then no-one would be happy with that.

“You have got to take the rough with the smooth and there is a risk to it. You are playing deep in your half and closer to your goal, so if you lose possession there they are more likely to score.

“At the end of the day, I think everyone enjoys the way we play and watching that style of play and that is well-documented. That is definitely the reason we are where we are I don’t think one small moment changes that.”

Gomez, who won the Champions League with Liverpool last weekend, also believes the number of players operating with a similar philosophy at club level has also helped bring the approach to the England set-up.

“It definitely helps,” he added. “I think most of us at our clubs have that exposure to playing out from the back, trying to play deep and play football.

“If it was a completely different style it wouldn’t be ideal, but I think most of the clubs, if not all, are used to that and it is definitely the way the game is going. It is a more modern style, so nine times out of 10 it is what people are used to at their clubs.”