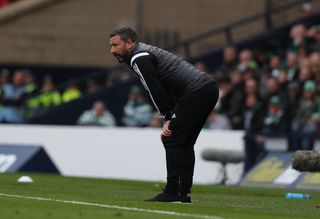 Aberdeen boss Derek McInnes was delighted with his side’s return to winning ways in Saturday’s 1-0 Ladbrokes Premiership win over Kilmarnock at Rugby Park.

The Dons were knocked out of the William Hill Scottish Cup last week in a 3-0 semi-final defeat by Celtic at Hampden Park but there was no one in red feeling sorry for themselves in Ayrshire.

In what was an ill-tempered match Killie defender Kirk Broadfoot was shown a straight red card by referee Steven McLean in the 36th minute for catching
Dons keeper Joe Lewis in the face with his boot.

Aberdeen defender Scott McKenna headed in from a Graeme Shinnie corner in the 66th minute before Kilmarnock defender Stuart Findlay was sent off for picking up the second of two yellow cards for a foul on the Pittodrie captain.

In added time Kilmarnock midfielder Rory McKenzie was dismissed for a clash with Dominic Ball.

When the dust had settled, the visitors had moved three points above Killie and into third place with four fixtures remaining with the prospect of European football under McInnes for a sixth successive season.

McInnes said: “I felt our calmness, experience and discipline showed.

“Although we had quite a young team in certain areas, I still felt our experience of this type of game helped and we managed to get the job done in what was always going to be a tough game.

“Nothing is settled of course. But it is three very important points.

“We still have a lot to do, we have to play against some good teams but it was an important three points and I am delighted with the reaction of my players.

“If anyone thought our season finished last week at Hampden, I think Saturday and the appetite of my players today illustrates the exact opposite.

“We have work to do to get a European spot.

“Other teams are desperate to get that because they have had a lack of European involvement in recent years.

“It is equally as important to us at Aberdeen.

“Hopefully we can get the job done.”

Steve Clarke, who called for referee McLean to  be taken off Kilmarnock  games in a scathing condemnation of the official’s performance, hopes his side get back on the winning trail but knows they face Celtic in their next game.

He said: “I’d like to get more points than last season and we have one point to go. We will try to beat 58 points.”