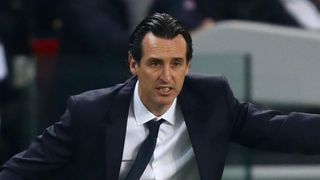 Unai Emery rejected the notion that Paris Saint-Germain went against the spirit of fair play during their 5-0 Ligue 1 win over Bastia.

Lucas Moura's 10th Ligue 1 goal of the season put the hosts in front at the Parc des Princes after 32 minutes and Marco Verratti added a controversial second shortly afterwards.

The Italy midfielder hammered an excellent strike into the top corner just after Bastia goalkeeper Jean-Louis Leca had finished tending to Blaise Matuidi – the PSG player who was down injured in his six-yard box.

Leca, who also had Julian Draxler standing in front of him in an offside position, was furious and earned a yellow card for prolonged protests.

After the match, Leca said he was "disgusted" by the incident, but Emery looked to play down the controversy in his post-match news conference.

"It's difficult," he said. "We wanted to play with intensity, it is true that Blaise remains on the pitch but as it is his team-mate [Verratti], he continues to play.

"He does not look how he is [positioned in relation to] the goalkeeper who, it is true, goes to see Blaise but later returns to the goal.

"I think that the spirit of fair play is not lost."

The victory, which was sealed by a brace from top scorer Edinson Cavani either side of Marquinhos' close-range finish, moved PSG level on points with Monaco before the leaders faced Nancy later on Saturday.

Leonardo Jardim's men have another game in hand but Emery was heartened to see his side still fighting for a fifth consecutive title.

"We achieved the objective we had mentioned in the locker room," he said. "We had a responsibility to play well, to play 90 minutes, to be competitive and we did.

"The team played well collectively, we still have the opportunity to go to look for Monaco.

"It's difficult but as long as we have that possibility, we will continue."