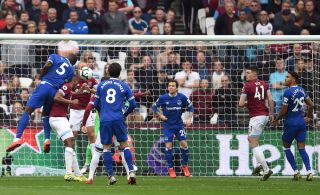 Everton took advantage of a shambolic West Ham display to leapfrog them in the race for seventh.

First-half goals from Kurt Zouma and Bernard secured a 2-0 win for a dominant Everton side and kept them firmly in the hunt for a potential Europa League spot.

Hammers boss Manuel Pellegrini has never failed to qualify for Europe since he arrived on the continent and is determined to maintain that proud record this season – but it seems nobody has told his players.

Indeed, on this evidence the fact that West Ham are even in with a chance of finishing as the ‘best of the rest’ serves as a pretty damning indictment of the rest of the league.

The hosts were disorganised and disinterested during a dreadful first half, totally overrun by visitors who looked sharper and more motivated from the off.

Notoriously slow starters, West Ham found themselves behind with just five minutes on the clock for the fifth time this season.

Zouma was the latest beneficiary, the defender losing Issa Diop at a corner before sending a downward header into the ground, up and over the head of Aaron Cresswell on the goal line.

West Ham were all over the place defensively and they were grateful to goalkeeper Lukasz Fabianski for limiting the early damage with a double save from Gylfi Sigurdsson and Bernard, and another to deny Dominic Calvert-Lewin, all within the opening 10 minutes.

A low cross from Bernard then somehow eluded Fabianski, and everyone else, as it rolled across the six-yard box.

A second goal seemed inevitable and it arrived in the 33rd minute, Richarlison playing in Seamus Coleman who brushed off Cresswell and rolled a simple ball square for Brazilian winger Bernard to tap his first Premier League goal into an empty net.

Fabianski came to the rescue again with a smart save to keep out Richarlison, while all West Ham had to show for a terrible opening period was a half-hearted attempted lob from Marko Arnautovic which barely disturbed Everton keeper Jordan Pickford.

Pellegrini summoned Michail Antonio and Javier Hernandez from the bench at half-time, with Pedro Obiang and Lucas Perez – the two worst of a bad bunch – hauled off.

Arnautovic was also sacrificed just after the hour to a chorus of boos from fans still unhappy at his attempts to leave the club for China in January.

West Ham improved as the second half wore on – although they could hardly have played any worse – yet still it was Everton who came closest to scoring again when Richarlison’s header crashed against the crossbar.