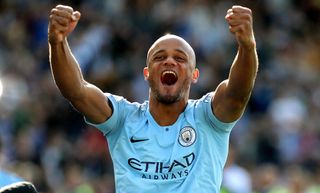 Pep Guardiola will let his players decide who should be Manchester City’s next captain.

The Premier League champions need a new on-field leader following the retirement of the long-serving Vincent Kompany at the end of last season.

David Silva took the armband for Wednesday’s pre-season game against West Ham in China but a decision on a permanent skipper will not be made until all the squad return from their summer breaks.

City manager Guardiola said: “They will choose the captain when we are all together. After they are all back (they are) going to make a meeting and decide who is going to be captain.”

Playmaker Kevin De Bruyne says he would happily take on the role if he was offered it.

The 28-year-old said: “About the captaincy, I don’t know. If the team wants me to be captain, or the club does, I would gladly accept it but I think that’s something everybody needs to talk about as a team, as a club.

“This will be talked about when everyone comes back. There are a lot of players missing from the Copa America and Riyad (Mahrez) is still at the African Cup of Nations.

“We will need to do that together because it is a really important job, not only on the pitch but off the pitch.”