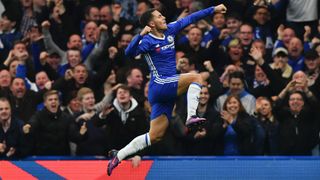 Reinvigorated under the guidance of head coach Antonio Conte, Chelsea attacker Eden Hazard wants to be among the top five players in the world after failing to make the shortlist for the Ballon d'Or.

After scooping the PFA Player of the Year award as Chelsea won the Premier League title in 2014-15, Hazard's form dipped dramatically amid the team's struggles and Jose Mourinho's departure last season, but the Belgian star is back to his brilliant best.

Hazard scored twice in Chelsea's 5-0 rout of Everton on Saturday, taking his Premier League tally to seven goals in 11 matches this term, having only netted four goals in 2015-16.

And as he enjoys more freedom under Conte, the 25-year-old is targeting the Ballon d'Or.

"Last season I was not good, so for me it was normal that I was not on the list," Hazard said.

"Yes, I want to reach that level."

"Last season was difficult for me. I tried to be the same player that I was two years ago," he added.

"But now I am trying to play like when I was a kid. I am enjoying playing now, my position is a bit different from before, I go inside more. It gives me more freedom, and I'm good for the moment.

"Conte has not change a lot, it is just that I have a little bit more freedom when we have the ball and without the ball.

"Because I don't need to defend against the right-back, because Marcos Alonso is there. I just focus on staying in my position. And when I have the ball I have more freedom and I can go where I want to go, and be decisive."