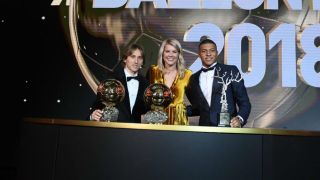 Ballon d'Or winner Ada Hegerberg says she was happy to dance with Martin Solveig after the French DJ caused controversy when he seemingly asked her to twerk on-stage after receiving the 2018 award.

Lyon striker and Norway international Hegerberg, 23, became the first ever female winner of the Ballon d'Or at a glitzy ceremony on Monday.

But Hegerberg's historic success was overshadowed by the reaction to a comment made by Solveig moments after she collected the trophy.

Ceremony co-host Solveig asked Hegerberg: "Do you know how to twerk?"

Hegerberg turned away as she responded: "No."

After the incident, which sparked outrage on social media, Hegerberg sought to clear up the matter.

"I've had a lot of questions about that subject," Hegerberg told reporters. "He came to me after and he was really, really sad that it went that way.

"I didn't think about it in that moment, I didn't consider it as a sexual harassment or anything.

"I was just happy to get a dance and celebrate winning the Ballon d'Or, to be honest."

Sincere apologies to the one I may have offended. My point was : I don’t invite women to twerk but dance on a Sinatra song. Watch the full sequence People who have followed me for 20 years know how respectful I am especially with women December 3, 2018

I explained to the buzz and she told me she understood it was a joke. Nevertheless my apologies to anyone who may have been offended. Most importantly congratulations to Ada December 3, 2018

Solveig used social media to send Hegerberg an apology and give his take on the incident.

"I am a little bit amazed as to what I am reading on the internet," he said in a video message. "I, of course, didn't want to offend anyone.

"This comes from a distortion of my English level and my English culture level, which is obviously not enough because I didn't mean to offend anyone and didn't know this could be seen as such an offence.

"Especially if you consider the sequence in total, when we ended up dancing to Frank Sinatra.

"This was a joke, probably a bad one, and I want to apologise for the one I may have offended, sorry about that."