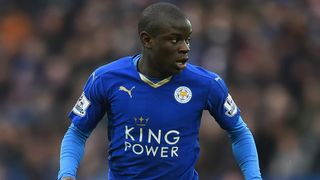 Leicester City star N'Golo Kante is set to have a stand named after him at one of his former clubs thanks to his heroics this season.

Kante, 25, joined Leicester in mid-2015 after stints at Caen and Boulogne, clubs now in Ligue 1 and the third-tier in France respectively.

Now, Boulogne are planning to honour Kante – who was at the club from 2011 to 2013 – by potentially naming a stand after him.

"[Franck] Ribery is a big hero in Boulogne because he was born here and played for the club," Boulogne general director Nicolas Durand told The Sun.

"His dad lives near the training ground and watches our games - so we named a stand after him.

"Franck has gone on to become a big star since he left us in 2002 - but we may well be naming a stand after N'Golo if he continues the way he is.

"It's incredible to think N'Golo was playing for us just three years ago in front of crowds of 2,000.

"Now he's about to become a Premier League champion and will be playing in next season's Champions League."

Kante's all-action displays have led to him earning two France caps this year, while he has one goal and four assists in the Premier League.