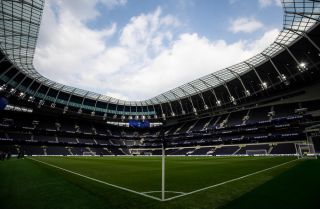 Tottenham’s new stadium is just a few days away from its grand opening after a successful final dress rehearsal.

The club’s “Legends” side played their Inter Milan counterparts in the second test event which is required to earn the relevant safety certificate from Haringey Council.

The Italians, who had Jose Mourinho in their dugout in a watching capacity, won the game 5-4 but Spurs will consider the evening a success.

FULL-TIME: It's all over at #SpursNewStadium. Inter take the win late on, but what an evening at our new home! #SpursNewStadium ⚪️ #COYSpic.twitter.com/gcHpbh5bC2— Tottenham Hotspur (@SpursOfficial) March 30, 2019

Providing there were no issues, the first official game will be the Premier League clash with Crystal Palace on Wednesday.

And the message from the former stars is clear – this has to be the catalyst to start bringing trophies back to the club.

Jurgen Klinsmann, who had two spells with the club in the 1990s, played for both sides but says his heart is with Spurs.

“I’m really honoured and really happy to be here and it is such a special day to get this new stadium going,” he said.

“Hopefully it takes Spurs into the future, with a lot of trophies.

“It is very special, even if it is 25 years ago that I came here for the first time the way people welcome me is something I will never, ever forget and I will always appreciate.”

This was a chance for more supporters to get a look at their new home following the first test event last week – an Under-18s clash with Southampton which was on a much smaller scale.

Around 45,000 were in attendance to watch their old favourites grace the new turf and they were entertained in a goal-fest of a game.

Spurs fans might have wished they were able to see some of the old boys play at the new stadium in their pomp as they were treated to a walk down memory lane.

Robbie Keane showed he still has class with a sumptuous lobbed finish, followed up by his trademark celebration, while his former strike partner Dimitar Berbatov produced a towering header.

The biggest cheer was for Paul Gascoigne, who made a brief but extremely popular second-half cameo appearance – though the former England midfielder had already made his mark at this new stadium.

Gazza is on the pitch! #THFCpic.twitter.com/BjwtsjBbn7— Jonathan Veal (@jonathandveal83) March 30, 2019

The golden cockerel, which stands proudly at the top of the imposing South Stand, is a replica of the one from White Hart Lane, made by 3D scan to include all of the imperfections of the original.

One of those is a sizeable dent created by Gascoigne, who shot at it with an air rifle during his stint here as a player.

The likes of David Ginola, who has had recent health problems, Rafael Van Der Vaart, Erik Thorsvedt and Darren Anderton also got the chance to experience the club’s new home.

But now, it is over to the club’s current crop of heroes.