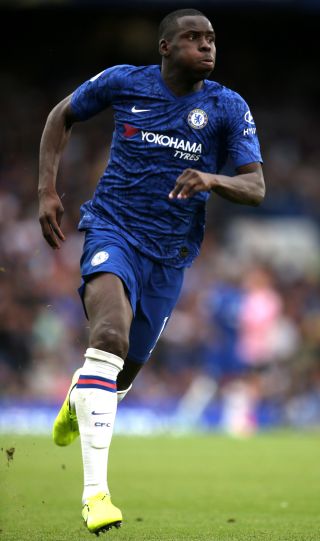 Kurt Zouma is relishing his second chance at Chelsea and is determined to help Frank Lampard’s reign be successful.

The 24-year-old has spent the last two seasons on loan at Stoke and Everton respectively, but is back in the picture at Stamford Bridge under Lampard, who has picked him in his first three games in charge.

Zouma spent much of the summer being linked with a return to Goodison Park, but his focus is now on cementing his place in Lampard’s team.

“I am here. Everything is done now,” he said. “I have to do my job here and I am happy to be here.

Here's how the Blues line up against Leicester today, our first home game of the season! 💪 #CHELEIpic.twitter.com/QOFh6DZfjA— Chelsea FC (@ChelseaFC) August 18, 2019

“I just want to work hard and play. That’s what I’m trying to do and the most important thing is the team. We need to start winning games.

“I’m not surprised (to be in the team) because that’s what I wanted. I came here and wanted to play.

“I am in a big club and everyone here wants to play. The competition is very hard and you can see in the squad, there are a lot of talented players so when you train, you have to do it right.

Really pleased to have made more than 100 appearances in @premierleague 🙌🏿 hopefully many more comin’ 😊🙏🏿 #lazoumance#alhamdulillah#hardworkpic.twitter.com/0rdwMIpxOZ— Kurt Zouma (@KurtZouma) March 6, 2019

“It has been a very, very long journey. I don’t want to talk about that now because that is the past but I fought very hard.

“People don’t know, people don’t see but I was in the shadow, working hard to get back because I had a very, very bad injury.

“I was off for one year but people forget that and don’t see. But me, I always believed in myself.

“My family was always there behind me, supporting me and now I am back here, I am very happy to play here. I just want to keep going.”

It has not been the best start for Chelsea as they are yet to win this season, though have played well in patches.

The first 25 minutes of their 1-1 draw with Leicester on Sunday was exceptional as they pressed their opponents and should have had more to show for their efforts than Mason Mount’s first goal for the club.

Leicester hit back after the break as the effects of Chelsea’s midweek trip to Turkey, where they lost to Liverpool on penalties in the Super Cup, took its toll.

“We had a long journey after the game and played 120 minutes there so it was difficult. We wanted to forget that with a win. Unfortunately, we couldn’t. We started the game very well. We need to keep that and move from there.”

Wilfred Ndidi earned Leicester a point with an emphatic second-half header, which atoned for his error in the build-up to Mount’s opener.

The midfielder, whose side missed several chances to win the game, had a sense of regret.

He told the club’s official website: “Getting this point, we’re not really happy, we’re kind of sad because we dominated the second half which could have brought a better result for us.

“It’s a mixed feeling for me because in the first half we were not up to it.

“We tried to come back in the second half, with better spirit and we tried to push forward.”