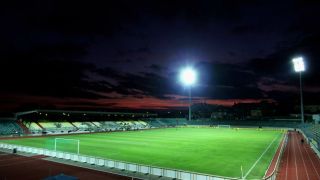 Nigeria caretaker coach Salisu Yusuf could give his hopes of taking over as full-time Super Eagles coach a boost with a convincing win over Luxembourg on Tuesday.

Kelechi Iheanacho scored from the bench as Nigeria beat Mali in Rouen on Friday - their first international win in five.

Nigeria cannot qualify for the 2017 Africa Cup of Nations, after Chad's withdrawal from the tournament left them stranded in their group, but the team are keen to build momentum ahead of 2018 World Cup qualifiers later this year.

A foreign coach had been expected to be drafted in after Sunday Oliseh's resignation in February, but the post is currently Yusuf's to lose.

NFF technical committee chairman Chris Green told Vanguard: "We are not going to wait for long before we choose a substantive coach for the Super Eagles. Already we have coaches that are on trial.

"We are currently looking at what they possess and the philosophy they are going to bring into the game.

"If they come up with qualities and a philosophy that will satisfy us, of course they will remain, but if they fail to satisfy us after the two friendly matches, we may not discard them, they will remain with the Super Eagles to understudy others.

"I would not say that we have restricted the Super Eagles coaching job to either foreign or home-based coaches; it is going to be an all comers' affair. We have received so many applications and when the time comes we will open them."

Iheanacho is likely to start in Luxembourg City following his substitute exploits last time out, while Yusuf has Wilfred Ndidi available after he missed the Mali game due to club commitments with Genk.

The hosts have lost their last three internationals to nil, since beating Greece 1-0 in November 2015.

Vincent Thill will be one to watch for Luxembourg. The 16-year-old will be hoping for his second cap after becoming his country's youngest international against Bosnia-Herzegovina at the age of 16 years and 50 days in March.