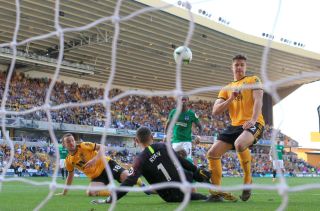 Brighton goalkeeper Mat Ryan believes his side’s point at Wolves will prove crucial in the race for survival.

The Seagulls are 17th in the Premier League and locked in a battle to stay up with Cardiff with four games remaining.

Saturday’s 0-0 draw at Molineux ended a run of five straight defeats in all competitions and Brighton head to Tottenham on Tuesday.

Ryan told the club’s official website: “The point means a lot in the context of things, it almost feels like we’ve won the game.

“With our superior goal difference, it could prove to be big come the end of the season – any points are vital at this stage of the campaign.

“Given our recent run it feels good to come here and give a reaction, and the clean sheet is testament to the effort of everyone.

“Every game is a final now and we have to leave everything out on the pitch every time we go out there.

“Recently we felt like we haven’t been wanting a result as much as our opponents, and that was frustrating because it’s what we based ourselves on.”

Ryan denied Leander Dendoncker from point-black range after Diogo Jota hit a post in the second half as the Seagulls clung on for a draw.

Jota also clipped the bar in the first half as Nuno Espirito Santo’s side dropped to ninth.

He said: “We had chances, we tried, we had a lot of the ball, it was not to be today. It’s just football.

“It’s very difficult to break a team down, we created situations and Brighton defended and defended well. Their main objective was not to concede.

“It’s up to us, we should do better in some moments. It was good goalkeeping, we hit the post, this is the game.”