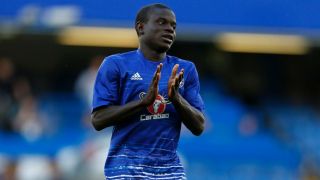 Makelele made over 200 appearances in all competitions for Chelsea between 2003 and 2008 and was regarded as one of the best players in his position at the time.

Kante has often been likened to his compatriot, but Matic is adamant the 25-year-old former Leicester star has something extra.

"Many people say that he is the new Makelele, but I don't think so," Matic told Sky Sports.

"Makelele was a great player and we all respect him, me especially because I know that position and how it is difficult to play. But I think that N'Golo is better than him. He is doing his defensive job very well and with the ball he has some extra quality.

"I know how difficult it is to play that position and I'm very happy because N'Golo is doing very well and is going to be a very important player for us, maybe one of the most important players in this season.