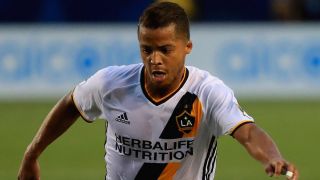 A brace from Giovani dos Santos helped the Galaxy record a 4-2 win over the Earthquakes in San Jose.

It extended Galaxy's unbeaten run to five matches as they rose to sixth in the Western Conference.

Chris Wondolowski had put the Earthquakes ahead in the California Clasico with a finish at the back post in the 10th minute.

Joao Pedro levelled for the Galaxy before Dos Santos' first, which came via the penalty spot.

Danny Hoesen then equalised for San Jose with a close-range finish and the entertaining half came to an end when the visitors went ahead again thanks to a Victor Bernardez own goal.

A Dos Santos header – his fifth goal in four games – sealed the win for the Galaxy.

Kortne Ford's 11th-minute goal proved decisive for Colorado, who are bottom of the conference, before Sporting had Roger Espinoza sent off late.

Lamar Neagle's penalty helped DC United to a 1-0 win over the Vancouver Whitecaps, who had Cristian Techera hit the post with a 96th-minute spot-kick.

The New York Red Bulls came from behind to beat the New England Revolution 2-1 and Real Salt Lake enjoyed a 1-0 win over Philadelphia Union.