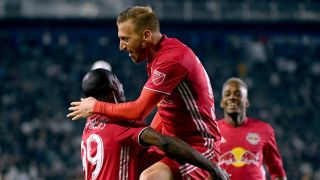 New York Red Bulls defeated Chicago Fire 1-0 away from home in MLS on Saturday to close the gap on Eastern Conference leaders Atlanta United to one point.

Bradley Wright-Phillips scored the only goal of the game in the 55th minute at Toyota Park, where Dax McCarty was robbed of possession and Daniel Royer reacted sharply to slip in the former Manchester City player for a simple finish past Richard Sanchez.

Gyasi Zardes' opportunistic 91st-minute goal saw Columbus Crew snatch a 1-0 win at home to Houston Dynamo, who have now suffered four successive defeats and will rue their defensive lapse late in the contest at Mapfre Stadium.

Philadelphia Union needed a penalty from Fabrice Picault in the 76th minute to earn a 3-2 victory at New England, Andrew Farrell and Wilfried Zahibo having cancelled out Jack Elliot's early brace for the visitors.

Kei Kamara and Cristian Techera netted in the first half for Vancouver Whitecaps, who secured a 2-1 victory away to Portland, ending the third-placed Timbers' 15-match unbeaten run.

Francisco Calvo received a second yellow card late on, but that did not prevent Minnesota United from earning an entertaining 2-2 draw at LA Galaxy, the hosts twice giving up the lead to drop points for the second match in succession.

And Jukka Raitala's equaliser allowed Montreal Impact to earn a point in a 1-1 draw at Real Salt Lake.