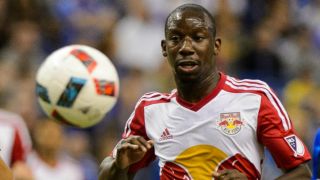 New York Red Bulls kept up the pace with their city rivals atop the MLS Eastern Conference courtesy of a 1-0 win away to Vancouver Whitecaps.

The club's record goalscorer found the net five minutes into the second half, extending his season tally to 17 as the Red Bulls moved a point behind NYC.

In the Western Conference, FC Dallas extended their lead atop the standings with a 3-1 win against Portland Timbers.

Mauro Diaz opened the scoring via the penalty spot in the 14th minute, before Victor Ulloa doubled their advantage on the stroke of half-time.

Walker Zimmerman made it 3-0 eight minutes into the second period, before Diego Valeri found a consolation for reigning MLS Cup champions the Timbers in the closing stages.

LA Galaxy ended their six-game winless run in the league thanks to a late 2-1 victory at home to Columbus Crew.

The scores were locked at 0-0 approaching the last 10 minutes before Baggio Husidic found the net for the Galaxy.