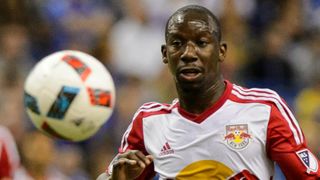 A Matt Polster own goal gave Red Bulls an early lead, but he turned from zero to hero on the stroke of half-time to put Chicago 2-1 up, after David Accam had equalised.

Chicago held off the Red Bulls for the majority of the second half, but they could not stop Wright-Phillips in stoppage time as the 31-year-old sealed a draw.

The point means Red Bulls are now four points behind local rivals New York City atop the Eastern Conference, having played the same number of games.

Sebastian Giovinco and Jozy Altidore scored in a 3-0 win over Columbus Crew, after Tsubasa Endoh opened the scoring in the eighth minute.

The win moves them ahead of Philadelphia, who suffered a 2-1 loss at home to Real Salt Lake.

Roland Alberg put Philadelphia ahead just before the break from the penalty spot, but Joao Plata and Javier Morales struck in the second half for RSL, ending a six-game winless run in MLS.

Take a bow, Joao!Plata with the stunning equalizer for August 1, 2016

FC Dallas extended their lead atop the Western Conference, sealing a 2-0 home win over Vancouver Whitecaps.

Kellyn Acosta and Maximiliano Urruti scored within three minutes of each other in the second half to secure the victory, which moves them six points above Colorado Rapids, but with three extra games played.

LA Galaxy missed the chance to move above Colorado into second, held to a 1-1 draw at Seattle Sounders, while Didier Drogba was sent off as Montreal Impact scored late to seal a 1-1 away draw to DC United.