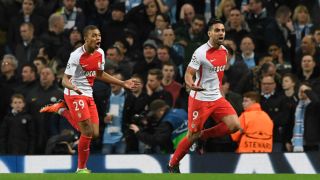 Radamel Falcao's inspired intervention from the bench secured a vital 2-1 win for Monaco against Dijon to restore their three-point lead at the top of Ligue 1.

With second-placed Paris Saint-Germain winning at Angers on Friday, the pressure was on Monaco to follow suit, but they trailed Dijon at Stade Louis II until Falcao, rested ahead of a Champions League clash with Borussia Dortmund, arrived as a substitute to create one goal and score the other with a pair of stunning free-kicks.

The visitors enjoyed the better of the opening 45 minutes as Lois Diony powered a left-footed shot against the crossbar before captain Cedric Varrault broke the deadlock.

Varrault was quickest to react when Danijel Subasic parried Julio Tavares' header, bundling the ball into the net, but Monaco regrouped and responded well after half-time.

Although Baptiste Reynet saved instinctively from Valere Germain's header, the goalkeeper was helpless to stop Falcao's 69th-minute free-kick from crashing down off the crossbar for Nabil Dirar to prod over the line.

The hosts thought they had scored again shortly afterwards, but Falcao was flagged offside as he waved a leg towards Kamil Glik's goalbound header.

Monaco would not be denied, though, and Falcao – from a similar position again – sent another magnificent free-kick arcing into the opposite corner to seal the points.