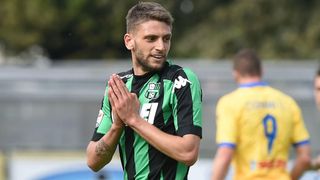 Sassuolo owner Giorgio Squinzi says he is not sure how Domenico Berardi's "story will end" at the club, but insists Inter do not have the financial muscle to prise away their star forward.

Berardi scored seven Serie A goals for Sassuolo this season, to add to the 42 he bagged in the previous three campaigns.

His impressive performances have led to reports that Inter are considering launching a bid for the Italy Under-21 international, while Juve are reported to have retained a buy-back clause after agreeing to end a co-ownership agreement last June.

Squinzi believes that Inter are unable to afford the 21-year-old, but admits Berardi's future is out of his hands.

"In terms of the future of Berardi, I have not the faintest idea how this story will end because it is out of our control", Squinzi told Corriere dello Sport.

"If Juventus want him, they can take him back because there is already an agreement there.

"If he stayed, I would be happy because I am a fan of his.

"As for Inter, it seems that they do not have the [financial] strength to buy him."

Premier League duo Manchester United and Tottenham have also been linked with Berardi whose goals helped Sassuolo finish sixth in Serie A and secure a Europa League place for the first time in their history.